WHAT ARE YOU
HOLDING ONTO? 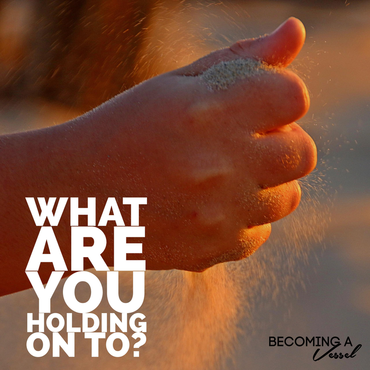 What are you holding on to? The question has been bouncing around in my head like a pinball begging for an answer. When a question repeats itself in my head, I know that God wants me to answer it. However, it is important to notate that the question was not, “What you are supposed to be holding on to?” Kristin, what's the honest, behind the veil answer? What are you holding on to? At first I didn't see it, blinded by the light of what I had already released from my grip. I’m not kidding. "Jesus, don't You see all that I've let go of? Here, let me show You my piles... friends, churches, riches, reputation, position...." The list went on.

Sometimes we become so focused on what we are not holding that we ignore what we are. "Kristin, what are you holding on to?" Shocked and almost taken aback, I responded to the whisper of the Holy Spirit with, "Nothing!" "Open your hand," He whispered again. "What? Really, You don't want to see my hands. There's nothing in them." Despite my protest, I revealed my hands. To my own surprise, I saw my resume covered with my accomplishments and achievements. I also saw the words expectations, desires, and qualifications bundled together with the word unbelief.

So, in this holy moment filled with understanding of what I DO know, I choose to open my hands and let go of all that I am, all I expected to be, and all that I have hoped to become. Jesus cleanse me. Give me clean hands. Give me a pure heart. Forgive me for any way in which I have lifted my soul to an idol. Create in me a clean heart, oh God. And then may the one thing I find myself holding on to be Your hand. Let my heart, once again, break for the things that break Your heart.

Who else is on this journey with me? Who is else is willing to let go? Who is willing to declare to Jesus that there is nothing we hold on to that is more important than Him? Who else wants to climb the mountain with hands wide open?  Let's light the match to the things we're holding on to, rise from the ashes, and move forward knowing that His grace is sufficient.